Mediaocean + Zendesk: Gaining 40 points in satisfaction and a 305% increase in self-service

After five years with Zendesk, Mediaocean was acquired and given a mandate to move over to Salesforce. Spending ballooned even as employee satisfaction and self-service plummeted. Armed with data, Mediaocean made the decision to move back to Zendesk. Employees stood up and clapped. Customers wrote in to thank them. 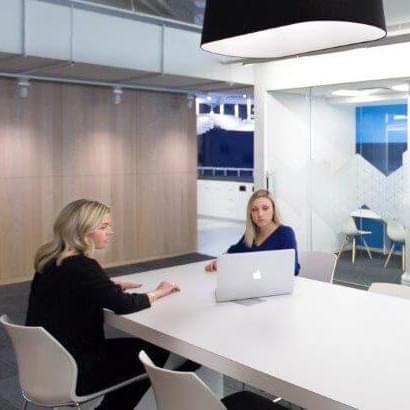 “We saw a greater ROI in Zendesk versus the other options. We did a cost analysis and showed how we were going to save money and increase productivity with Zendesk"

increase in help center use

Although paid advertising has changed dramatically over the years as marketing channels have multiplied across global markets, it remains one of the best ways to spread the word about new products and media content.

Today the sea of options is made more navigable by Mediaocean, which offers brands, agencies, and media sellers in 77 countries a platform and products to manage and coordinate the entire workflow, from planning to payment, across both traditional and digital ad spaces.

That breadth of reach—powering over $140 billion in media spend globally, serving more than 80,000 users—requires the company to have a strong support backbone. Heading up this effort is Stephanie Dorman, Senior Vice President of Client Services. “A lot of what we do is consultative. Our clients want to know how to use our system in the best possible way,” she explained.

Support agents must understand clients’ specific goals—a monumental undertaking, considering that the Client Services team handles an average of 26,000 tickets each quarter, 50 percent of which are submitted by email. To meet this volume, Dorman oversees a distributed team of 150 customer service specialists that provide cross-platform and technical support 24 hours a day, 5 days a week, from 10 of their 14 offices around the globe.

Her still-growing team has doubled in size due to rapid growth and acquisitions since Mediaocean first implemented Zendesk Support in 2012. At the time, the company was newly formed through a merger and Dorman set out to blend two support teams and roll out a new, single customer service solution. It needed to be affordable and easy to implement.

The team considered 10 options before selecting Zendesk Support, which stood out for its clean user interface and the efficiencies the software would allow. “We saw a greater ROI in Zendesk versus the other options. We did a cost analysis and showed how we were going to save money and increase productivity with Zendesk,” Dorman recalled.

At first, the implementation was challenging, which led Dorman to team up with a Zendesk customer success executive to help overcome obstacles and create a strategy to ensure a successful deployment. “I needed somebody who was going to facilitate results, and that’s exactly what happened,” Dorman said. “We were beside ourselves happy because both our internal users and our clients loved the product.”

By building a strong collaborative partnership Zendesk in those early days, Mediaocean and Zendesk forged a relationship that, five years later, is still going strong. With happy agents and happy clients, Dorman’s team continued to grow and her positive experience with Zendesk was further extended through Zendesk’s Service Leadership Forum, where she was able to share and exchange experience and knowledge with peers. On the product side, the team had integrated SnapEngage and Talkdesk to provide an omnichannel agent experience and to capture all customer contacts in Zendesk.

Trying and learning the hard way

But more changes were ahead: Mediaocean was acquired and given a mandate to move to a prominent CRM provider. Though reluctant to switch, Dorman and her team stayed positive and objective. Yet the first inkling of trouble with the rollout came during the implementation process. She explained, “The other system had some strengths, but for us, it was complicated and incredibly expensive. Every time we turned around, there was another unanticipated customization or charge.”

These added costs included hiring a dedicated administrator to manage the tool full-time. Meanwhile, case collision issues were reducing agents’ productivity. Dorman explained, “This was a big deal because we’re very collaborative. We do a metric on ‘average number of tickets closed per day per rep,’ and this was declining because people were spending so much extra time on the process part of it.”

The system change also impacted the client experience. Dorman said, “Our web portal usage dropped by 75 percent the first quarter after we went live, which meant more calls were coming into our support desk. Our clients were saying we didn’t have what they needed anymore.”

A data-driven return to Zendesk

An analysis of feedback from agents and clients indicated that many of the issues they faced involved the new system. Dorman also discovered that the vendor considered Mediaocean too small to be a priority. At the same time, a matrix she and her team created to compare Zendesk against its replacement revealed that 90 percent of what they needed was available out of the box in Zendesk, but required costly, time-consuming configuration or customization from the other provider.

Even armed with this data, Dorman doubted Mediaocean would approve a return to Zendesk. She explained, “We had spent a ton of money to make the change. But the more we went through the process, it became clear we needed to go back. We’re eating many hundreds of thousand of dollars to move back because we still have two years left in our contract.”

Dorman and her team were able to make their case and when the decision was announced, everyone at Mediaocean cheered. Dorman said, “They literally stood up and clapped. It wasn’t just support—it was our account management team, our HR team. We were so happy and immediately kicked off the implementation process.”

Mediaocean was back up and running on Zendesk in two months’ time, by August 2017. “We went live without a hitch. That was above and beyond expectations. As a fellow software company, we expect there to be a few challenges. But this was a seamless process,” she said.

Starting fresh gave Mediaocean a chance to improve its previous configuration and processes. Both clients and internal agents are now using a knowledge base powered by Zendesk Guide. From the Zendesk Apps Marketplace, the team uses the CloudSET to track 6 ticket component levels with thousands of possible combinations and manage client SLAs.

Dorman and team further extended Zendesk with a powerful integration between Salesforce and Support, with the help of Azuqua, one of Zendesk’s preferred data synchronization partners. Azuqua’s integration platform makes it easy to connect and deploy data between systems without the maintenance and overhead of IT admins. Mediaocean is also building a complex integration with JIRA—something the team hadn’t been able to accomplish before.

“We love our integrated tools, and the portal is probably most important for me because we have invested a lot into building a knowledge base for our clients and our internal team,” said Dorman.

They were back up and running on Zendesk in two months’ time... “We went live without a hitch...we expect there to be a few challenges, but this was a seamless process."Stephanie Dorman, Senior VP of Client Services - MediaoceanThere are more success metrics in this story of delivering great experiences. Employee satisfaction, which had dropped by 20 points when Mediaocean moved away from Zendesk, has since risen by 40 points. Dorman noted that returning to Zendesk had a direct impact on agents’ morale, and they particularly enjoy the clean ticketing interface and inline editing capability. With a satisfied team and user-friendly tools, Mediaocean maintains an agent attrition rate of less than 3 percent and can provide new hires with a knowledge base that helps strengthen and speed up the onboarding experience.

Building a help center to help customers self-serve was easy