Recently, we’ve had the opportunity to really get to know our neighborhood YMCA. For us, that particular branch is the Shih-Yu Lan Central YMCA. It’s located in the Tenderloin, just like we are, and is about four blocks from our offices.

April 28th was the organization’s Healthy Kids Day, an event that is hosted at every YMCA branch (1,900 total) across the US. The event kicks off the Y’s “Take on Summer” campaign, which encourages families to keep active throughout the summer months. Summertime is apparently when kids are most likely to slack off on their exercise regimens and their studies. So the idea behind Healthy Kids Day is to get kids amped on running around like crazy and eating well.

We provided two food demo stations: a wildly popular unfrozen yogurt parfait bar, where kids could add things like cereal and granola into low-fat vanilla yogurt. And, yeah, we let them splurge by providing gummy fruit snacks and chocolate chips. (Everything in moderation). The second was the less popular ham pinwheel station. We learned kids love ham pinwheels, they’d just rather you make them for them. 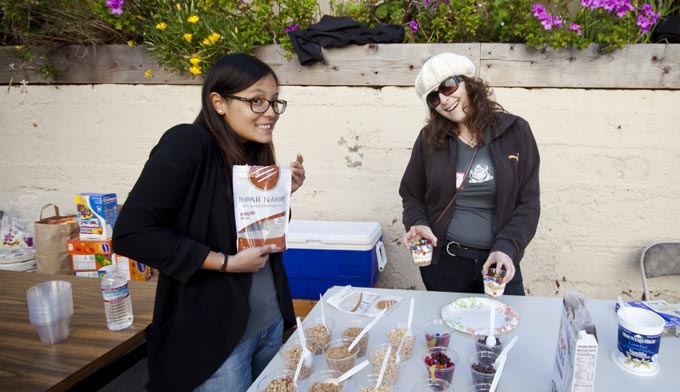 Marissa and Roxy get the unfrozen yogurt bar set up.

The premise behind both stations was to create snacks that were fun to make and had ingredients that could easily be found in the neighborhood. The problem with the Tenderloin is it lacks a full-service grocery store. Many families do most of their shopping at corner and convenience stores. We also got the kids competing in three-legged races, an “egg” and spoon race (we used ping-pong balls instead), and a hula hoop competition. 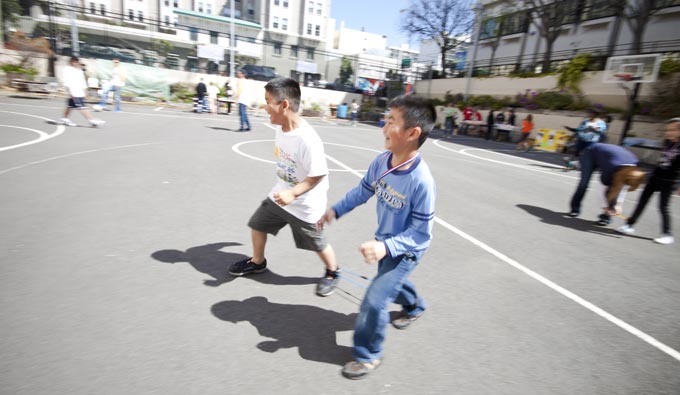 Happy winners of the three-legged race!

That’s when we learned kids prefer running through hula hoops vs. actually trying to hula hoop. 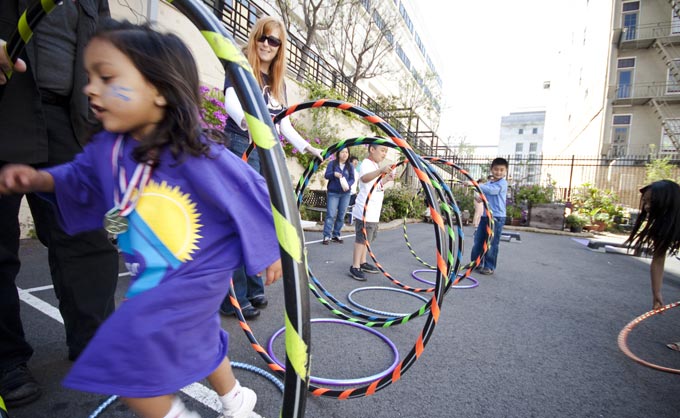 These were great activities as they didn’t require a ton of space. Because another drawback of the TL: lack of open, green spaces.

It was an awesome day. The kids were pretty darn cute, extremely friendly, and their parents incredibly grateful. As a staff, it was a cool way for different departments to work together that normally don’t. Even though we were giving up our Saturdays to staff the event, it didn’t feel like work.